Record Round of $680 Million to Build Sports Entertainment Giant NFT 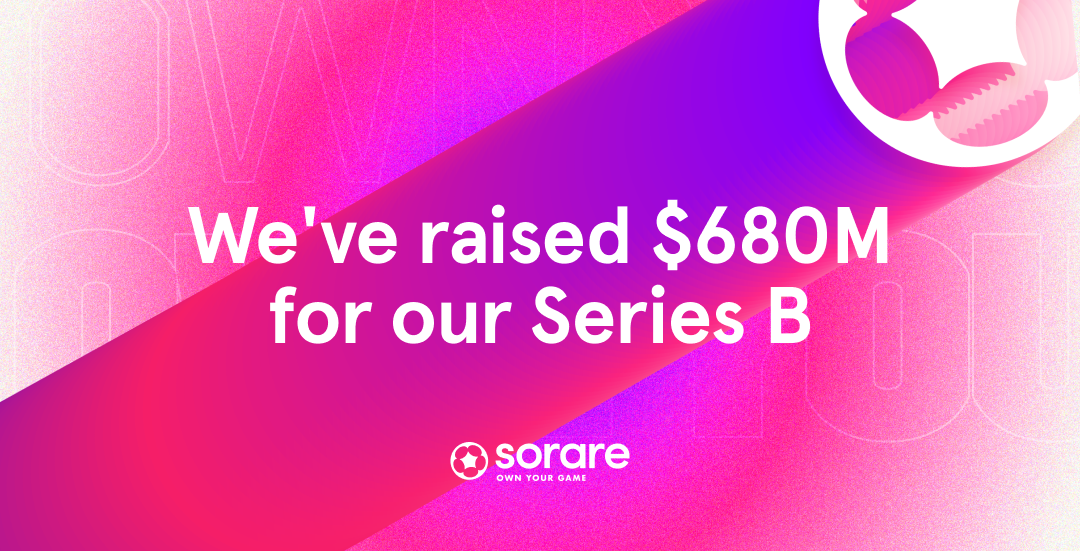 Today is an important update on the progress of the overall Sorare project that is transmitted to us directly by the words of CEO Nicolas Julia. A new funding round that raised an impressive $ 680 million to be reinvested in the future of the world’s number one NFT fantasy football platform. He commented on the news “When my co-founding partner and I first presented our vision of Sorare in the summer of 2018, our ambition was to create a new game that could unlock the unlimited potential of technology. not fungible. Because of our shared passion for the beautiful game, creating a fantasy football product was the perfect reason to start our journey”.

Indeed, through Sorare, the full potential of a technology that is literally transforming the digital games industry has been tapped. From the first day of the platform’s launch, football fans have well received the innovative vision of the two Sorare founders, and indeed, have actively contributed to pushing Sorare towards new and dizzying heights of global success.

The first round of investments

During last February it has already been announced that Sorare was able to raise fifty million dollars by attracting the aims of so-called “series A investors”, that is, in possession of adequate economic requirements in terms of financial reliability. We are talking about actors who in traditional markets had already promoted projects and platforms such as Twitter, Snapchat, Instagram, Discord, Accel and so on over the years, as well as an additional team of world-class professional investors including celebrities from the world of football such as Antoine Griezmann, Rio Ferdinand, Oliver Bierhoff, Alexis Ohanian and Gary Vaynerchuck.

Just a decade ago, buying a virtual sword in a game seemed insane. Today, collecting digital cards is extremely avant-garde. The growing convergence between our offline lives and those experienced online has led to a growing frenzy of excitement around what are digital collectibles (today so-called “non-fungible tokens” or NFTs). NFT collectibles contain a multitude of different aspects, such as culture, status and feelings, and which are nothing more than a reflection of the times we are living in.

Blockchain technology gives Sorare cards the power to apply what we have just seen to football, therefore much more than mere tools representing only collector’s items. The digital cards Sorare have a utility that can be spent in all global fantasy football games supported, as well as other different but always exciting features even in terms of personal investment.

The results achieved so far

The first round of investment mentioned above has undoubtedly helped to significantly accelerate the development and integrity of the ecosystem as well as improve the active gaming experience of the user community. These objectives correspond to important and expert members of the internal development staff, therefore a world-class team is being built in Sorare, whose size in recent months has practically tripled compared to the team that was originally there.

A five-year partnership with LaLiga was signed and over fifty clubs and national teams added. La Liga is one of the best leagues in the world, home to some of the best known clubs and players in the world, so all 20 La Liga clubs have joined Sorare with their player cards which have consequently become available on the fantasy market. Thanks to a considerable technical contribution, it was possible to drastically reduce the size of the infrastructure on Ethereum, consequently reducing waiting times between transactions as well as the very hateful fixed costs that were paid in the form of gas.

The team has decided not to compromise the safety and usefulness of the Sorare cards and to defend the community of players. Ethereum offers interoperability and the cd. “Network effect” that no other blockchain project is able to offer. It is the most “decentralized” infrastructure, and without any for-profit organization controlling it from above.

After extensive due diligence, it was identified that ZKP-powered Layer 2 was the only true solution capable of scaling without compromising system security. StarkWare ZK technology is ready for mass production and has been field tested before with excellent results.

No less important is the introduction of a new level of scarcity of player cards, capable of making Sorare a fantasy football game accessible to all fans globally also in terms of initial starting capital available.

The so-called “Limited cards” have introduced a new scarcity threshold on Sorare, of the order of one thousand copies per player starting from the 2021-2022 season. The relative “Limited” player cards are clearly identifiable also thanks to the yellow border that distinguishes them from the other scarcity levels to which we are already widely accustomed (i.e. the Unique, Super Rare, and Rare cards).

In 2021, more footballers, clubs and football fans around the world have embraced Sorare’s NFT fantasy football model and discovered a new and deeper connection with their sporting favorites. Now there are over one hundred and eighty clubs, six thousand licensed players and more than six hundred thousand registered users on the site, without forgetting that we are in effect only at the beginning of this adventure. The idea is truly innovative, and with Sorare a model was built that laid the foundations for the advent of the next giant in sports entertainment.

The second round of 680 million dollars

The real news today is in fact in the new round of investment offers received, with financial taxpayers who supported the project up to a truly record fundraiser: 680 million dollars, the largest in the history of French technology and the largest in Europe for a Serie B round.

Led by SoftBank, the aforementioned fundraising was also achieved thanks to the participation of Atomico, Bessemer Ventures, D1 Capital, Eurazeo, IVP and Liontree, uniting historical investors such as Benchmark, one of the largest venture capital companies in the world, Accel and Partech, and leading business angel investors including Reddit co-founder Alexis Ohanian and soccer players Gerard Piqué, Rio Ferdinand, Antoine Griezmann and César Azpilicueta.

Record-breaking Round B is a major mission statement that will greatly enhance the NFT fantasy gaming experience for the millions of football fans on the platform.

According to CEO Nicolas Julia, this fundraiser will help achieve a key goal: “to create the next world champion in sports entertainment., taking advantage of NFTs. To achieve this, we will use the funds to continue building a world-class development team by recruiting the best talent from around the world. We are looking to place and pay for many new roles to be available, both in Europe and the US – we invite you to check out our open positions. New partnerships have been signed that have brought on board the top twenty football leagues and the top fifty national football teams. An acceleration has been given on the development of mobile devices as well as in terms of marketing and media exposure: our fantasy game will be a first level experience on mobile platforms, which fans all over the world will be able to know and experience”.

Regarding the expansion towards new types of supported sports Sorare has registered a strong interest from different leagues and fans from all over the world, with the express purpose of trying to replicate the fantasy football model in other sports as well. In fact, the intention to launch new sports is already planned starting from next year.

Up to now, Sorare has experienced an entrepreneurial adventure that has represented a crossroads between sectors such as sport, digital gaming, and an exciting new technology: non-fungible tokens (NFT).

Continuing along the path traced so far, the Sorare team intends to return all the affection received in these intense years to the community of users. To do this, three programs have been developed that will be implemented in the near future.

The first is to support those directly community-led football programs : football can change lives, bring happiness and should be accessible to anyone according to the vision of CEO Julia who declares “we will work and support community-led initiatives that aim to bring the magic of football to young people from the most disadvantaged backgrounds”.

The second key point pursued by the Sorare executive is to support young entrepreneurs who have less availability and access to economic resources : “we were very lucky that the investors supported us in our initial Seed financing and we want to offer small businesses the same opportunities that we have also had in their search for funding, particularly in the field of sport and digital gaming“.

Lastly, in Sorare it is also important to support female representation in sport : today women’s sports are undoubtedly underrepresented, undervalued and devalued compared to their male counterparts: “we believe that NFTs can significantly accelerate the development of women’s sports. We will actively invest in this sector starting with women’s football“.

In case you missed it, you can watch and share the announcement video available on the official Sorare Twitter profile.

Nicolas Julia concludes by saying that “we would like to thank the Sorare user community for the journey we have made together so far. You were the first to believe in our vision. We look forward to continuing to grow together as a community, as a game and as a company for many more years to come”.

By giansla
1 Mins read
The Sorare team is delighted to welcome Mexico City’s first club, Club Universidad Nacional or simply Pumas to the NFT ecosystem of most played fantasy football in the world. Founded in 1954, the club represents…
News

By giansla
6 Mins read
After the historic partnership a few days ago with the Spanish Liga, the Sorare team has also announced a further new partnership with the German Bundesliga and Bundesliga 2. What is the Bundesliga? The German…
News

By giansla
1 Mins read
In a period in which Serie A had some of the best defensive formations football has ever known, the Swan of Utrecht, Marco van Basten remained a forward who expressed a historic excessive power. In…