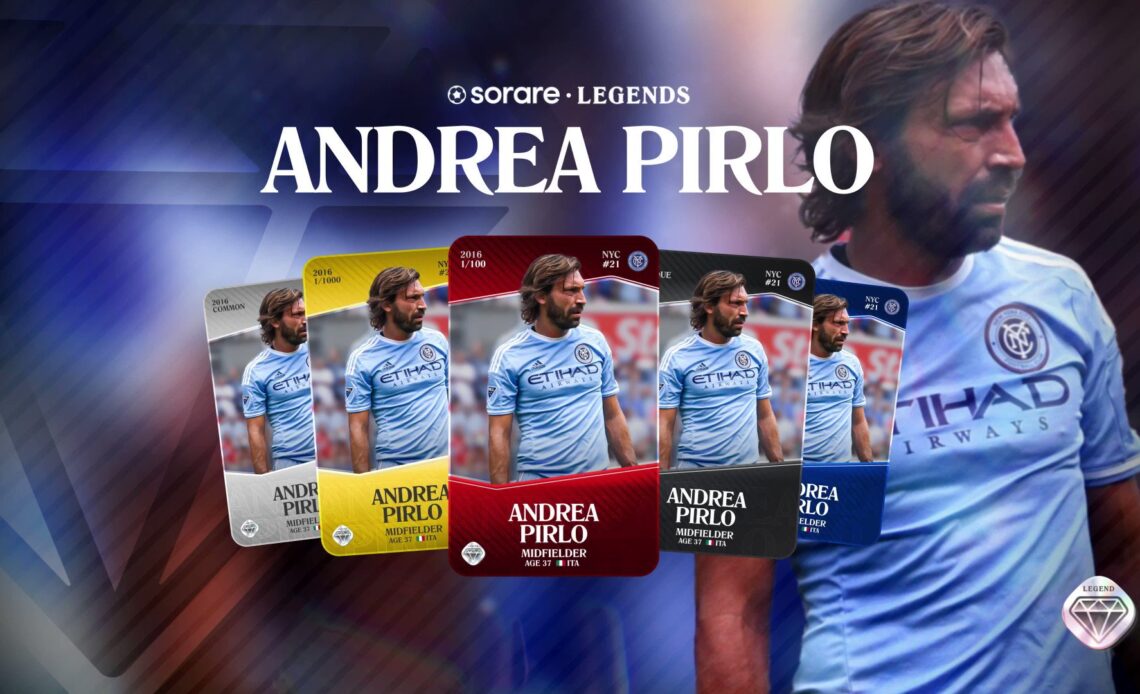 One of Italy’s most recognisable legends, Andrea Pirlo finally lands on Sorare. Pirlo is remembered for so many different accomplishments. The playmaker masterminded countless successful attacks, magically directed free kicks into the back of the net and honoured his country with a fourth FIFA World Cup. Known around the world as Il Maestro, Pirlo has been a fan favourite for decades, no matter where his career took him. Having played for the best teams in Italy, the master ended his career alongside other legends with New York FC. Now, Andrea Pirlo finally graces Sorare’s collection of legendary masters and players can make use of his talent in upcoming legendary challenges.

Andrea Pirlo started his career in his hometown of Brescia, way back in 1995. As an attacking midfielder, he helped his side win the Serie B title in 1997, taking Brescia back into Serie A’s glory. But his talents were immediately spotted by Inter Milan, who signed him on the following year. The three years he spent at Inter Milan were incredibly turbulent. Limited playing time and subsequent loans continuously took him away from the club. It all finally came to an end when rivals AC Milan secured his services in 2001.

His ten years at AC Milan saw him grow into the legend we now know. Among the long list of titles that Pirlo secured, he helped see his team to two Serie A championships, two UEFA Champions League victories, as well as a Coppa Italia and two Italian and European Supercups. If that wasn’t enough, Pirlo was also pivotal in the incredible Italian side that took home the FIFA World Cup. At the mature age of 32, Pirlo needed a new challenge, transferring to reigning Italian champions, Juventus. Pirlo helped his side win four Serie A titles, as well as a Coppa Italia and two Italian Super Cups.

In 2015, Pirlo finally moved away from Italy spending two seasons with New York FC before retiring in 2017.

The Italian legend makes his way to Sorare’s legendary collection. Pirlo comes in his New York FC attire, giving the MLS its very first Sorare legendary player. Managers can add Pirlo to their legendary challenge squad, where he will take on the best score of New York FC’s current midfield players. You can purchase Pirlo’s card in a variety of rare levels.

Sorare continues to add more legendary players for managers to use in their weekly Sorare strategies. Pirlo’s inimitable status can help secure some victories for users who follow the MLS and we’re sure he’ll be invaluable in upcoming legendary challenges.