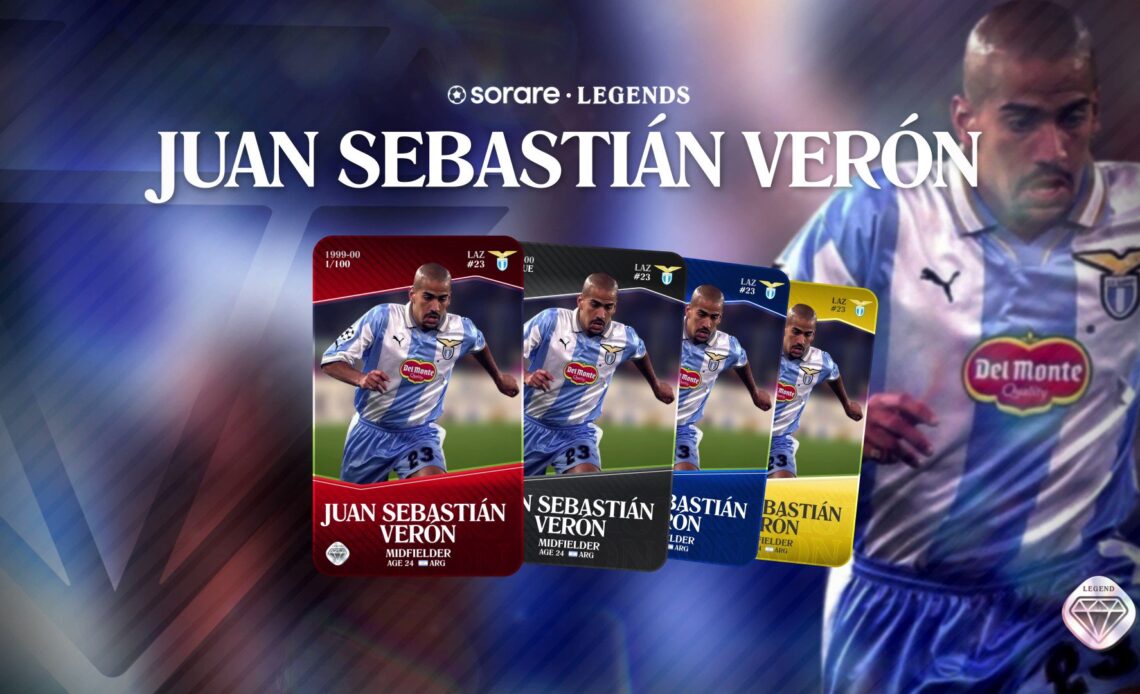 Sorare continues updating us with even more champions for its legendary collection. We’ve seen iconic players landing from different footballing eras and across all continents. The next addition to that collection is none other than the legendary Argentine midfielder, Juan Sebastian Veron. Although he played with clubs like Parma, Manchester United, Internazionale and even Chelsea, Veron’s most iconic club remains Lazio. La Brujita brought an unmitigated level of success to the Roman club and can hopefully help guide you to plenty of Sorare rewards in the challenges that lie ahead.

Juan Sebastian Veron’s career began in 1993 when he joined Estudiantes, helping the club reach the Argentine Primera Division in 1995. He was nicknamed La Brujita after his father who was known as La Bruja, the witch and also played for Estudiantes. 1996 saw Veron join Boca Juniors, where he played with the legendary Maradona for one season. That very same year, Sebastian travelled across the pond, transferring to Eriksson’s Sampdoria.

His exploits in the 1998 FIFA World Cup, earned him a transfer to Parma. The following season, his club lifted both the Coppa Italia and UEFA Cup trophies. But at the end of the season, Eriksson came calling again, this time signing Veron to his new club, Lazio. In 2000, Veron was key to the team’s success and Lazio managed to win the Scudetto and Coppa Italia, as well as the European and Italian Super Cups. Eriksson’s Lazio was a force to be reckoned with, featuring the likes of Salas, Nedved, Simeone, Mihajlovic and Nesta. But the following year, Veron moved on to Manchester United, making him the most expensive player in Premier League history.

His time at Old Trafford was marred with countless injuries, which side-lined his performances and his effectiveness within the team. Just a couple of years later, he joined Claudio Ranieri at Chelsea for half the price United had originally paid. But Veron eventually found success again in joining Internazionale, where he formed part of the squad that won the 2005 and 2006 Coppa Italia.

Veron’s talents and skills are now yours to enjoy with his very own Sorare card. He sports Lazio’s shirt from the 2000 season, where his side lifted 3 trophies, including the Italian Scudetto. As a midfielder, Veron takes on the points of Lazio’s current top midfield player. He can be deployed for legendary challenges. You can find the Veron legendary card across all scarcity levels.

Another Legend to Add to Your Collection

As more legendary challenges continue to release, the role of legendary player cards becomes increasingly more important. If you’re looking to plan your next Sorare strategies, you may want to support your midfield side with Veron’s very own card.

For more on everything Sorare, keep checking back to WeSorare.com.