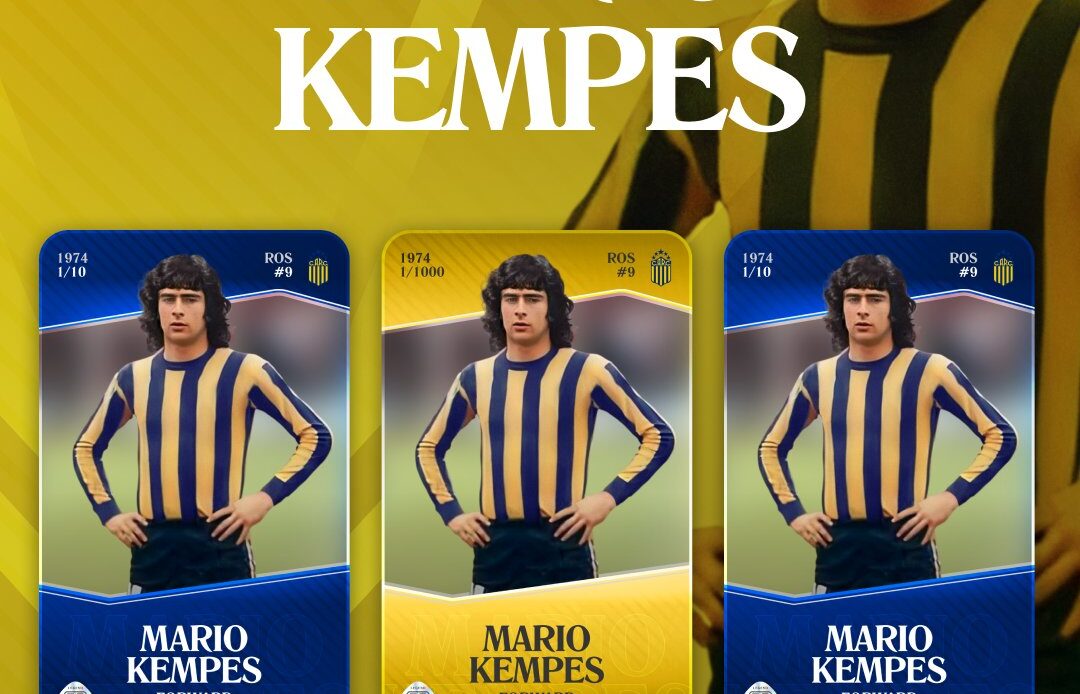 The legends’ line-up never stops growing. Sorare has continued to bolster its ranks with more top players from all around the world. The latest addition is Argentine legend and Valencia icon, Mario Kempes. The striker was a force to be reckoned with, becoming world champion in 1978, when Argentina finally lifted the cup for the very first time. His incredible skill and intuition have earned him an eternal place in football history. El Matador now graces the front of Sorare’s cards, lending a hand in upcoming legendary challenges.

Born in Bell Ville, Cordoba, Mario Kempes began playing with his local club, Istituto before quickly moving to Rosario Central. Here Mario Kempes showed off his true potential, scoring 85 goals in 105 matches. His talent attracted scouts from Valencia who were keen to add him to the Spanish side’s squad.

At Valencia, Mario Kempes established himself as one of the world’s best players. He became La Liga’s top scorer for two seasons in a row. These exploits helped Los Che win the Copa Del Rey, Cup Winners Cup and two Pichichis. A famously hard-working forward, Mario Kempes liked to shoot from outside the penalty area, surprising the opposition with his strength and accuracy. This proved to be difficult for many defenders to manage, creating issues for all those who faced his team.

Beyond club football, Kempes managed to become one of Argentina’s most notable players. Throughout his career, Kempes represented Argentina in three world cups, winning the 1978 cup which was held on home ground. Kempes was crucial for his side during the competition, becoming the leading goal scorer in the tournament. He won all three awards at the tournament, the Golden Boot and Golden Ball, as well as the cup itself. Mario accomplished all of this, at just 23 years of age. His career took him to several clubs across the world, including Hercules, First Vienna, Pelita Jaya and Lushnja.

The Matador finally makes his way to Sorare. On your legendary Sorare card, Mario Kempes is presented as a striker, donning his Rosario Central shirt from 1974. It’s the season that started it all for him, scoring 25 goals and securing the title for this side. Now, you can deploy Mario Kempes in your Sorare strategies, taking advantage of his prowess and talent to win legendary challenges. Mario Kempes’ card comes in all rarity levels. His score is based on Rosario Central’s current top striker.

As part of its commitment to providing new and exciting content, Sorare continues to release more and more legendary player cards. Mario Kempes is finally available to support your Sorare endeavours, helping you win Sorare tournaments with style. Will you be adding Kempes to your Sorare squad? Let us know in the comments below.