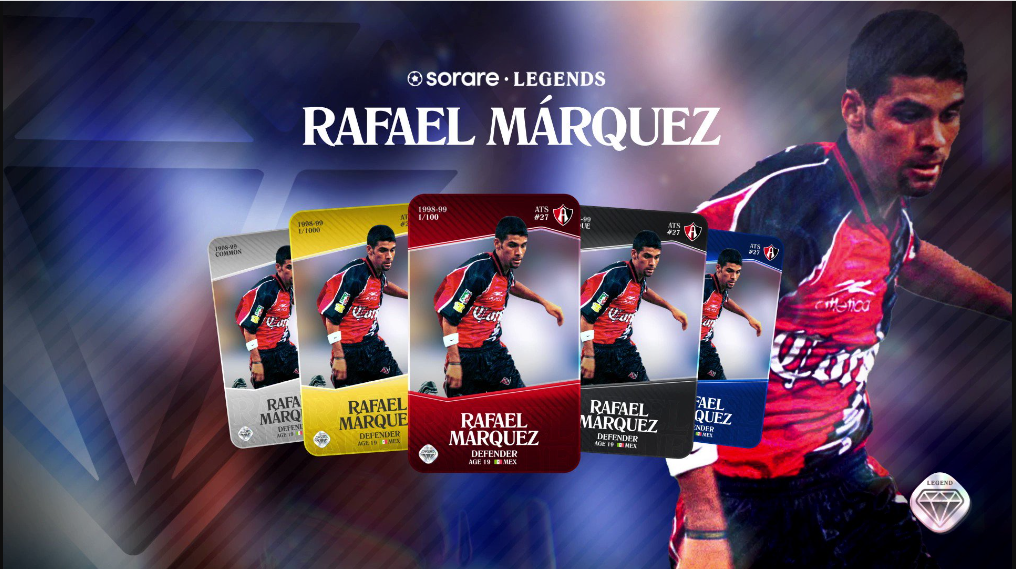 One of the most prominent defenders to ever emerge from Mexico, Rafael Marquez led a new wave of incredible players from the country. From Atlas FC to Barcelona and beyond, the central defender dazzled fans around the world with his inimitable skill. Nicknamed El Kaiser, Rafael Marquez is now the latest player to be added to the Sorare legendary collection. His incredible defending skills will still come to good use in Sorare legendary challenges. Find out more below!

Marquez began his career at Atlas FC in Mexico, having debuted for the team in 1996 when he was only 17 years old. His impact was immediately felt by the team and Atlas FC made it up to the final in the Verano cup of 1999. Unfortunately, the club lost to Toluca on penalties, but Marquez’s performance was duly noted around the world. He joined AS Monaco the following season. In France, Marquez won both the Ligue 1 and the Coupe de la Ligue before eventually moving to Spain.

2003 was the start of a new project in the Catalan capital of Barcelona. Marquez joined Rijkaard’s team with teammates like Ronaldinho, Xavi, Iniesta and Eto’o. His first season saw the club finish second behind Valencia CF, but future seasons brought unimaginable success. With Barcelona, Marquez won all major competitions including La Liga and the UEFA Champions League.

His career took him to New York Red Bulls, Leon, and Hellas Verona before finally returning to his beloved Atlas FC. Marquez also represented his national side in numerous FIFA World Cups, CONCACAF Gold cups and Copa America tournaments. He is the third most capped player in Mexican history with 147 appearances and 4 FIFA World Cup appearances.

Rafa Marquez remains one of the most celebrated central defenders in football history. His efforts were pivotal during FC Barcelona’s golden age, winning incredible honours in the process. Now, the Mexican legend joins other icons in Sorare’s Legendary Collection. Marquez dons his Atlas FC shirt from 1999, taking on his pivotal role as a central defender. His card can be used in any Sorare legendary challenge. Marquez takes on the highest score of current Atlas FC players. Rafael Marquez’s card comes in all scarcity levels.

Add More Class to Your Squad

If you’re looking to boost your defensive squad for legendary challenges, then Rafael Marquez might be the player you’re looking for. His incredible talent will reverberate across any Sorare strategy you might b looking to deploy. As the months continue to roll on, Sorare adds even more quality players to its legendary collection. Be sure to keep checking back on WeSorare.com for the latest tips, guides, and updates for your Sorare experience.

By Anton Saliba
2 Mins read
As the list of legendary cards continues to grow, Sorare managers are getting more options to deploy some of their favourite players. The latest legend to grace Sorare’s pages hails from Finland and managed to…
News

By Anton Saliba
2 Mins read
The European football seasons have to come to an end, and what a year it’s been. All across the continent, clubs have vied for the top spots, hoping to be crowned champions within their country….