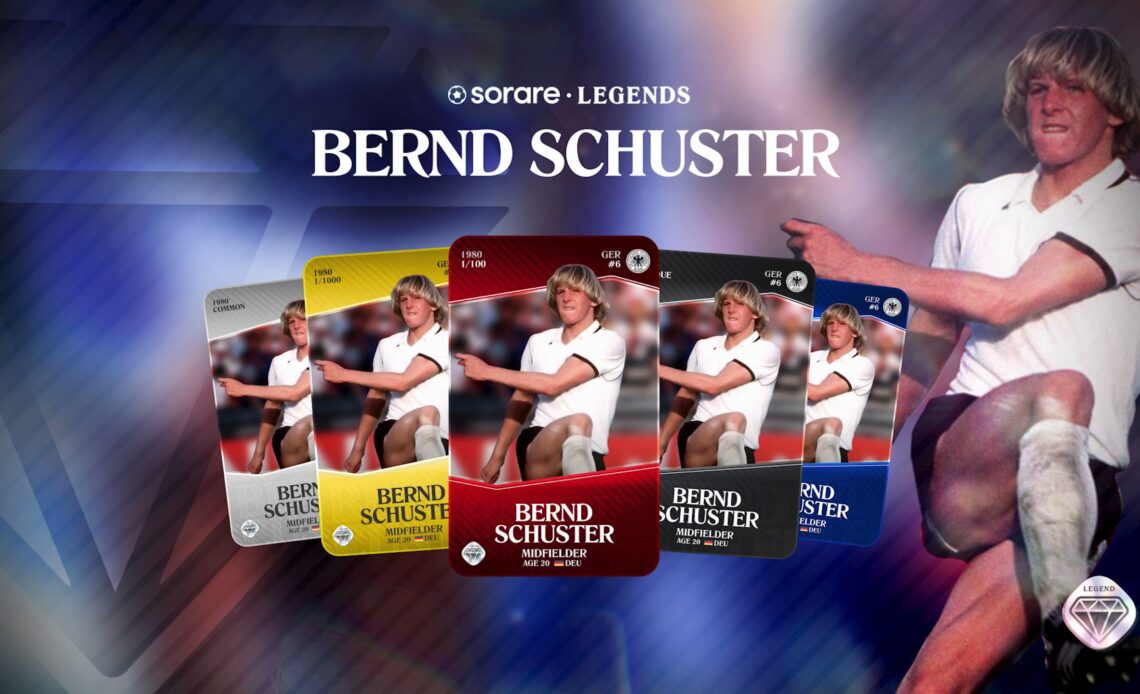 As one of the most iconic German players of all time, Bernd Schuster is remembered as a hero by the teams he played for and a menace by his adversaries. Raw talent mixed with a dose of strategy and tact made him unstoppable on the field, a true force to be reckoned with. Although Schuster hung his boots back in 1997, his exploits remain in the minds of all who witnessed them. He is now honored as one of Sorare’s legends, joining new football campaigns once again in the search for more glory. Read on below to find out more!

Schuster’s career kicked off back in 1978, when at the tender age of 18, he played for FC Koln. His stint with the German national team during the 1980s highlighted his talents to the world. This resulted in interest from Spain’s FC Barcelona, who signed him that very year. Barcelona became Schuster’s home for the next eight years. His time in the Catalan capital introduced him to a number of trophies, including La Liga, Copa del Rey, and the European Cup Winners Cup.

In a shocking and controversial transfer, Schuster switched sides to FC Barcelona’s rivals, Real Madrid. Life in the Spanish capital was equally rewarding. Although he only sent two seasons at Real Madrid, Schuster won a handful of honours here as well. These included two la Liga trophies and a Copa del Rey. In another controversial move, Schuster moved to Real Madrid’s local rivals, Atletico Madrid. During his three seasons there he managed to propel the club forward, making them a strong side in the Spanish league.

Eventually Schuster moved back to Germany, where he spent the remainder of his career playing for Bayern Leverkusen. He also enjoyed a fruitful career as a manager, coaching the likes of Shakthar Donetsk, Malaga, Getafe, and Real Madrid.

As one of the most iconic German players of all time, Bernd Schuster joins Sorare’s legendary collection. He sports his Germany shirt from the 1980’s European Championship, playing as a midfielder. His presence will prove vital in any Sorare legendary challenge, so be sure to get your hands on Schuster’s card if you need to bolster your midfield strategy.

Bernd Schuster will go down as one of the best German players of all time. His accomplishments can be remembered and celebrated with his very own Sorare card. It comes in all scarcity levels and can be used in Sorare legendary challenges. Schuster features in all international competitions where he takes on Germany’s top midfielder score.

Sorare continues to add more exciting and varied players to its legendary collection. How do you feel about the additions they’ve made so far? Let us know in the comments section below.