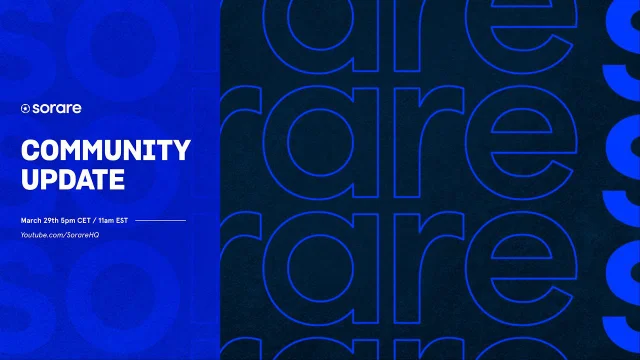 Fans have been asking for Sorare to open its doors further, creating a better link between the people who make the game and those who play it. Sure enough, the team announced that they would be delivering a series of community updates throughout the year. These updates are meant to keep the community in the loop with the game’s constant development, introducing new features and additions along the way. Sure enough, we finally got the first of these with the March Community Update!

The gaming world is no stranger to these sorts of community events. PlayStation’s State of Play and Nintendo Direct provide a similar service, but Sorare have taken things a step further. Rather than just have a series of trailers that detail new updates, the team have taken a more personal approach, delivering the presentation themselves. The result is a warmer, more personable update that assures players that Sorare is keen to engage in better ways.

Kicking things off was a series of community stats. The team proudly announced the staggering figure of 15 million fantasy teams that were submitted by 1.5 million managers across 184 countries in 2021. Need a minute to process all that? Don’t worry, we did too. 60% of all Sorare players joined through referral, proving that players are recommending the experience to likeminded individuals. As the Sorare community continues to grow steadily, the game has managed to secure over 230 football club partnerships, delivering licensed players, logos, and kits. The most recent, exciting addition through the inclusion of the Major League Soccer.

The North American league is now officially part of Sorare and will feature heavily in the 2022/2023 season. Although managers could already collect cards for players who formed part of the MLS Players Association, these cards will now come with official kits and jerseys. The MLS has seen a lot of growth in the past few years and the upcoming 2026 world cup will only continue to increase the number of fans on the continent. This new partnership is great news for Sorare’s presence in North America, with MLS’s Emerging Ventures SVP Chris Schlosser stating, “We know that together we are going to break new ground, build new experiences and offer MLS fans around the globe, a chance to better connect with their favourite teams, players and clubs”.

An Update Towards Better Communication and Rewards

Furthermore, the company pledges to improve further upon its customer interaction. Monthly newsletters for upcoming tournaments, auctions and updates will be launching soon to accompany these community updates. The team will also be adding real-time customer feedback to make sure player’s demands and concerns are addressed in the best way possible. Sorare also pledges to keep a sustainable and healthy game economy, giving the platform increased security and stability.

Ethereum lies at the core of the Sorare experience. Unfortunately, the currency has proven to be a barrier to some players who find the technology all too difficult to wrap their heads around. Ethereum price fluctuations have also been a cause for concern and the team has decided to do something about it. As such, rewards for victories, podiums and rankings will work as follows. Points over the 205-threshold result in $25 ETH, while points reaching over the 250 mark are worth $50 ETH.  Podium standings will be following a similar conversion rate. These new changes will go into effect in August 2022, at the start of the European season.

We finally managed to get a look at the new player cards for the 2022/2023 season. The new design maintains a familiar look, while adding new and unique traits. Club and nationality have been added to each player, with an improved typography and design that helps make the cards more legible. Limited, Rare, Ultra Rare and Unique cards will also be getting five distinct backgrounds. These new iterations give the cards more distinction, adding a more recognisable look and feel to every scarcity level.

The new cards will start rolling out in the next few weeks, with the J-League, K-League and MLS versions all releasing in the next month. The rest of the line-ups will be launched throughout the remainder of 2022.

Older cards can still be traded and used, although they will be missing out on their current season bonus. New cards will have an increased 5% bonus added to them.

As of this new season, Sorare is also adding in new Rare Division rules that allow managers to use 5 rare cards to compete. The update goes live this August. Additional weekly tournaments like the Legends Challenge, the Underdog League and the Specialist League will continue to give managers more challenging ways to strategise and compete.The Sorare team pledges to continue monitoring community data and feedback in order to keep creating exciting opportunities across all levels of card scarcity.

Given the incredible response and popularity of the Underdog Special Weekly, Sorare has decided to turn this into a standardised weekly tournament. The Underdog League will be taking place every week, with different scarcity requirements and score rules every week.

The Rare division has also been modified to simplify its requirements. Community cards will no longer feature in these tournaments. Instead, managers will have to compete with 5 Rare cards. This change comes as an attempt to balance out the game and add more of a fun factor to the division. These changes will also come into effect with the start of the new European season in August 2022.

The Legends Challenge is feature players have long been waiting for. The league will give managers the ability to finally utilise their legendary cards when competing in tournaments. In these legendary tournaments, scores are assigned based on the performance of today’s equivalent players. This is calculated by looking at the club that the legendary player used to play for and finding the highest score for a player in the same position. This means that if you have the Zinedine Zidane legendary card, his score will be based on the best performance of Real Madrid’s current midfield players. The first Legendary Challenges will occur on Game Weeks 260, 264 and 268. Teams competing in these challenges will need to have at least one legendary card. More legendary challenges are expected to follow.

Last, but certainly not least, Sorare has finally announced the launch of its brand-new mobile app. It is currently available on iOS, with an Android version on the way. The app finally means that the game can be enjoyed on the go, with an intuitive design that allows for quick access to both your card collection and tournaments. New sharing features take the social aspects of the game a step further and players can share their collection, stats, and progress with friends. The app is divided in three sections that give players a whole new way to look back on previous scores, efficiently follow up on tournament progress and plan for future competitions. The app also reflects Sorare’s new visual overhaul, taking this new venture as an opportunity to build a more user-friendly UI experience.

Most importantly, new app notifications mean that you will be alerted to any updates regarding your team and their current score. This innovative function will be expanded further over the coming weeks, with reward claim support and more expanding on the app’s engaging mobile experience.

Keeping the Community in the Loop

With this March Community Update, Sorare has really managed to set the right tone for communicating with its player base. The team seems set on making food on its promises, providing players with detailed updates into the latest Sorare innovations. From new leagues, to feature enhancements and even a new mobile app, the team never fails to impress. We’ll expect to see player numbers bolster thanks to these new measures.

Here at WeSorare, we’ll keep you posted whenever a new community update hits the net. Until then, be sure to keep reading through our Sorare Strategies or check out our Sorare FAQ to answer any burning questions you might have.