Players with Cards having Different Roles 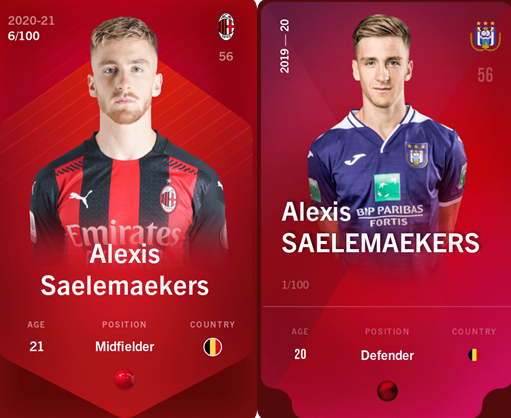 Sorare managers will have noticed that the score assigned to certain players of their Sorare team is sometimes different from the score indicated on the player profile. This is explained because in the event that a player has two types of cards available in the game with different roles recorded on them, he will generate different scores depending on the “position on the field” recorded during the minting of the card.

Things are starting to get interesting when you consider that on Sorare the player’s profile will only show the score of the position in which the player is currently active. This is made even more significant when you consider that Sorare Data shows a graph of the scores of the position that was active during the corresponding week of play. Some may have been midfielders first, then forwards, and that is even before returning to their original role as midfielder again. The complete history of SO5 shown on SorareData will highlight in such cases a combination of the score obtained both as a midfielder and as a forward.

It is important to note that where the player is deployed on the pitch has no relation to their own metrics, which instead deal with the score assigned to the player based on the position printed on the respective NFT card. This means that there are cards in the game that may score more or less than the figure shown in Sorare, so today we’ll take a closer look at those particular hidden talents.

There are several players in the game with cards having multiple positions and today for the purposes of this analysis we will select five for each group with a selection of different types of players who collect AA points in different ways.

Saelemaekers has both a defender and midfielder card within Sorare’s game, but is currently playing more in an advanced position on the right side of the midfield. The important variable here is that Saelmaekers is playing on a very strong team. In this example his defender card exceeds his midfield card where the notable exception was in the match against Sassuolo where Milan did not keep a clean sheet. Saelemaekers doesn’t score many points for “contest won,” suggesting that rather than attempting to beat a player by dribbling, he operates as a broad creator who opts primarily for passing to teammates. This is important as a player who attempts to dribble more frequently risks being penalized for loss of possession based on the current scoring matrix.

Cacace has played both as a left defender and a left midfielder in a team struggling with relegation, his scores are real ups and downs, however, his midfielder card has tended to overtake the defender card. The main catalyst in this example is lost possession, defenders score -1 for each loss of possession while for midfielders it’s only -0.5. This particular difference has a strong impact on players with defender cards who are playing in more advanced positions and who cross into the box.

Similar to Cacace, Laryea is another player who occupies a more advanced position and plays in one of the weakest teams in the league he belongs to. Like Cacace, Layrea’s midfielder card tends to outperform his defender card, however, there was one notable exception against Orlando. The main reason for this difference is that Layrea has won most of her head-to-head duels. A lost duel sees a defender lose 2 points, however, winning a duel only earns 1.5 points. As a general rule, a Layrea would have to win at least 65% of their duels for its defender card to beat the midfielder card.

Rybus is another player who plays within a team that dominates in terms of possession, but has a notably different playing stance than seen with Saelemaekers, playing a much more defense-oriented role. It still contributes in an offensive sense but in a very different way from Layrea and Cacace. Rybus tends to operate as a deep creator and scores points similarly to Kieran Tripper, playing with long balls from the back to create opportunities rather than offering a direct threat in overlaps. Despite being a different type of full-back, Rybus is similarly penalized by the current scoring matrix with negative points for lost possession weighing heavily on his overall score.

Bill Tuiloma plays as central defender for the Portland Timbers, although he also played a different position he was also penalized by the lost possession metric when he scored as a defender. In the 5 games analyzed Portland failed to keep a clean sheet and there was only one game in which Tuiloma had a score of less than 10 in the lost possession box. This highlights how important this metric is for defenders and in this example it was not neutralized by the points scored for a clean sheet.

On the basis of what we have seen, we can draw the conclusion that in the case of players who have both a defender and a midfielder card, more often than not, the player’s midfielder card will be better than the defender’s card due to the greater deduction of points that defenders receive for duels and lost possession. The only exception to this is for players on a very strong team in possession who often keep clean sheets.

Looking at Michael Barrios’ comparison of scores, the possession lost statistic once again has a dominant influence on the overall score. Attackers lose only 0.1 points for each loss of ball possession, compared to 0.5 for midfielders. For this reason, his Attacking card constantly exceeds his Midfielder card.

Let’s also compare a completely different type of player to Tajon Buchanan, who plays as a right winger in a 4-2-3-1. Tajon is much more involved in the construction game than Barrios who tends to act as a sniper for Colorado instead. Despite the contrast in playing styles, ‘Lost Possession’ is still seen as the dominant scoring differential, with Tajon’s Attacker card beating his own Midfield card.

Nani is the first example of a player who scores more points as a forward but the score shown in Sorare refers to the midfielder version of his card. His Attacker card consistently outperforms his Midfielder card, but it is the midfield score that is shown in the game that could affect its value. His L5 as a forward is 69.2 which ranks him as the best forward in the MLS but does not appear in the ranking on SorareData as his active position in the game is listed as a Midfielder.

The only area in which the Midfield cards exceed the Attackers cards is in the case of players making tackles and interceptions. Attackers do not receive points for these game actions, so it is the only area that offers balance to the “Possession lost” penalty. Cristian Cásseres, who averages 6 tackles and interceptions per game for the NYRB, is the perfect card to test the theory that an all action midfielder could be the exception to the fact that the forward is better than the midfielder card. Casseres L5 includes matches for Venezuela and NYRB and highlights the difference in its role internationally compared to NYRB. With the NYRB he plays more centrally and consequently collects more tackles and interceptions that affect his AA as seen against Orlando. For this player who averages a significant amount of steals per game when playing for his team, we can expect the midfielder card to regularly outweigh the card as a striker.

Last but not least, a true hidden gem, Yuya Kubo. The curious case of Kubo begins with him starting the season as a left winger in a 4-2-3-1. Manager Jaap Stam has made the decision to transform Kubo, who has played as a playmaker / winger for most of his career, into a deep attacking midfielder. His 2020 cards were minted as a midfielder, but his 2021 cards were minted as a forward. Consequently it is the scores of his Attacker card that are shown in Sorare. His L5 as a forward is a measly 40, however as a midfielder he is worth 55, ranking him 28th out of all MLS midfielders in the game.

When players have both a Midfielder and Attacker card in play, the role the player plays has a huge effect on which of the cards will be most effective in SO5. The general rule is that wingers and forwards will perform best as attackers in Sorare. However, if your player occupies a deeper and more central position in the game that allows him to collect an AA score in tackles and interceptions, the most effective card is likely to be the midfielder version.

It is incredibly important to consider a particular player’s style of play if he has two different positions available in the game as there are a couple of key aspects of the scoring matrix that will harm or benefit particular types of footballer.

As a general rule we say that attacking wingers and full-backs are more likely to lose duels and ball possession in a match as they are usually encouraged to attempt to create attacking opportunities with progressive dribbles or crosses that often end in a turnover. The scoring matrix heavily penalizes defenders for this (-1) while midfielders (-0.5) and forwards (-0.1) to a lesser extent. If you have a player who has two cards in this scenario, the card with the lowest negative score for lost possession is probably the best choice.

The scoring matrix currently does not give points to attackers for tackling and interceptions. These are high scoring actions for defenders and midfielders instead, so if you have a player who frequently wins the ball as we saw for Casseres and Kubo, they are likely to overcome the additional negative point deduction a midfielder card gets against an attacker. Most of the time, these players play centrally in a deeper position. The only sure thing is that adding an extra dimension to player scouting offers opportunities for discerning managers to gather players with hidden scoring potential.