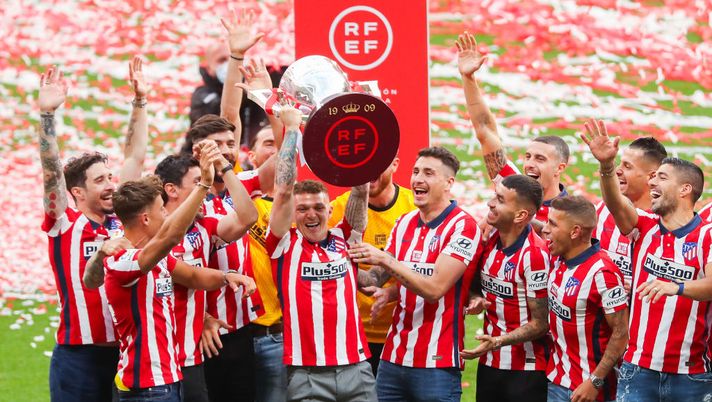 Today we will make an overview of the contending teams for the title of champion of the Spanish Liga 2021/2022. Clearly we will focus on those teams that managed to finish in the top 5 last year and therefore start from a realistic base to become champions in this exciting season that has just begun. We are talking about Atletico Madrid, Barcelona, ​​Real Madrid, Sevilla and Real Sociedad. If you missed our guide of Sorare, you can find it here.

Barcelona will undoubtedly take a long time to adapt to the loss of one of the greatest players of all time, Messi, and Real Madrid for their part is in recent times susceptible to less offensive skills than those exhibited in the recent past under the leadership of Zinedine Zidane. The other team from Madrid led by Simeone is very talented and we can say that it is flying towards a probable back to back title win. It is true that Atletico have lost a champion of the caliber of Alvaro Morata who is doing well at Juventus, as well as Moussa Dembele, however he can count on for this season the vast majority of his team who became champions of Spain just a few months ago.

Atletico Madrid won the La Liga title last season and it seems likely that they will successfully defend it in 2021-2022 as well. Under heavy goals from former Blaugrana expert Luis Suarez, Atletico Madrid undoubtedly deserved to win the La Liga title last season. The team has been pushed very well by the experience of footballers of the caliber of Juanfran, Diego Godin and Filipe Luis to those of Jose Gimenez, Kieran Trippier and Stefan Savic.

Atletico Madrid also signed Argentine national midfielder Rodrigo De Paul from Udinese this summer. The 27-year-old was one of Argentina’s best players during the triumphant Copa America 2021 campaign and will certainly inject immediate quality into the colchoneros’ midfield. His arrival in fact heralded the departure of Saul, with destination London, Chelsea district. However, Barcelona, ​​in a precarious economic situation, turned the former Atleti play Antoine Griezmann right back to the reigning champions.

On the manager’s side, manager Diego Simeone remains one of the best in the world, even though his style of play receives intense criticism from several industry experts. Joao Felix is ​​one of the most exciting youngsters in the league and Luis Suarez has shown that he still has a lot to offer his fans. Kieran Trippier, Yannick Carrasco, Angel Correa, Hector Herrera and Koke form a solid core for Atletico Madrid. Jan Oblak is one of the best goalkeepers in the world, if not the real number one. Thomas Lemar and Rodrigo de Paul are talents on the rise and who could emerge even more this season under the leadership of Cholo. Athletic is a team that exploits the depth of its squad, rich in talent and which often tends to slip off the radar of bookmakers at the beginning of the season, however, we at WeSorare choose it as the number one contender for the title.

What is certain is that Barcelona have not exactly enjoyed the best transfer window ever. After finishing with a disappointing third place last season, the blaugrana have signed at no cost Memphis Depay, Sergio Aguero and Eric Garcia, all without paying a single Euro. Brazilian full-back Emerson Royal returns to the club after a successful loan spell with Real Betis. In the meantime, let’s not forget that the acquisition of the young Austrian striker Yusuf Demir could prove to be a real masterstroke for Catalan scouts.

Defense, however, remains a big problem for the giants of La Liga. Gerard Pique is no longer the player he once was during his best period even if for us Sorare fans he continually churns out stratospheric scores in terms of fantasy football. Clement Lenglet fought really hard for a spot last season. Samuel Umtiti is reportedly free to leave and there may be intense pressure on young stars like Garcia, Emerson and Sergino Dest to perform during this 2021/2022 edition of La Liga.

It is not in this situation that the Catalan club wanted to find themselves after the summer break. The daring departure of former captain Leo Messi creates a huge void on the pitch and especially in the locker room. Longtime fans have lost their icon, worshiped at the level of a deity, in summary: the club really seems to have lost its soul. In any case, there is still a whole season ahead of us and a national title to compete for, with a Barcelona that still has many young talents on the roster. Frenkie de Jong, Serginio Dest and Ansu Fati form an intriguing trio to join the likes of Aguero, Depay, Antoine Griezmann and Marc-Andre ter Stegen. Veterans Sergio Busquets and Gerard Pique will also be instrumental in Barcelona’s path to the title this season. Messi’s departure also opens up an opportunity for other players to step forward, but the real question is: is there really anyone who can take a witness of this magnitude? In our opinion at WeSorare it will take time, and only one season seems really too short a period to find again a winning pace against really famous opponents.

However, they chose the very expert and former luxury Carlo Ancelotti trying to focus on a “safe used” that is able to immediately take command of the team (but the Italian has a really hard job in his hands). Sergio Ramos and Raphael Varane played a key role in the Blancos’ incredible success under the leadership of Zinedine Zidane, so replacing them will not be a routine job at all. So far, Real Madrid seem happy with the team they have set up and the bookmakers seem to agree in giving it as a favorite for the 2021/2022 title. The Merengues have also hired David Alaba on a free transfer, and it is probably he who represents the ideal replacement for the former Sergio Ramos.

Meanwhile, Nacho and Eder Militao are the other options to fill the role of central defense. The blancos undoubtedly have a good goalkeeper in Thibaut Courtois, but the aging midfield formed by Luka Modric and Toni Kroos is a bit worrying this year, also taking into account that the attacking department is led by the splendid though 34-year-old Karim Benzema. Let’s face it, no club is happier than Real Madrid’s Messi departure. The club lost Sergio Ramos and Raphael Varane, but Karim Benzema, Gareth Bale, Eden Hazard, Luka Modric and Casemiro reconfirm a hard core for Real Madrid. The youth movement will be important this season under Carlo Ancelotti. Brazilians Rodrygo and Vinicius Jr.

Real is a candidate to be the best team on paper, especially with Thibaut Courtois in goal and should be able to take advantage of the insatiable hunger for goals that never leaves the French captain and international Karim Benzema, who has shown a lot of skill in constantly scoring year after year for a long time. Real Madrid clearly hopes not to repeat a season like the one just passed, where the club has not managed to win even a single trophy. The La Liga title is a very real possibility this year. It is clear that Real Madrid is raising funds to land Kylian Mbappe next summer if not already during the winter transfer window. Considering all the variables (read: Atletico Madrid) bank record champions Real Madrid have a good share this year to clinch the final victory. However, not having an overwhelming advantage over their rivals, they will have to demonstrate that they know how to excel on the field during this season which promises to be one of the most uncertain in recent years.

Sevilla finished fourth in La Liga last season, with manager Julen Lopetegui continuing to do a really good job at the helm of the Spanish club. The footballers have been heavily involved since the summer transfer window. After selling talented striker Bryan Gil to Tottenham Hotspur, Sevilla have added Argentina winger Erik Lamela to the squad. The 29-year-old was part of the deal that led Gil to London for the Spurs. They could lose center-back Jules Kounde soon, with Chelsea being keen to take over the youngster.

Rumors suggest French central defender Kurt Zouma could join Sevilla as part of the Kounde deal. Sporting director Monchi is a veteran of the category and is considered one of the best in the world at his craft, so you can expect Sevilla to be deservedly in the top four if not quite in first place for the La Liga title.

Real Sociedad enjoyed a truly impressive past season, finishing fifth in the league and winning the 2020/2021 Copa del Rey title. Sociedad relied on the talent of young striker Alexander Isak, the Swedish international was undoubtedly in excellent physical shape last season. Isak’s talent was often linked to persistent transfer rumors this summer, but he eventually signed a contract extension with the club. In addition to Isak, coach Imanol Alguacil has been able to count on the experience and quality of former Spanish internationals David Silva and Nacho Monreal. Midfielder Mikel Merino was instrumental in their excellent position, while Sociedad recently added Australian goalkeeper Mathew Ryan and Spanish left-back Diego Rico to their ranks.